5 of the Wildest Announcements From CES 2023

As the dust settles after the year’s biggest tech products convention, the most interesting, out-of-the-box gadgets from the event’s more than 100 exhibitors are becoming clear. Want to know the wackiest, wildest, and most futuristic gear that debuted at the 2023 Las Vegas show? Look no further.

Why does the party always end up in the kitchen? LG isn’t focused on answering that question, but rather keeping the party going in the most sociable room in the house.

The refrigerator with MoodUP, unveiled at IFA 2022 in Berlin this September, boasts a diverse range of rich, dynamic colors to choose from; providing a convenient way for users to enliven their kitchen whenever they feel the need to change or refresh the mood. With the arrival of Viva Magenta, the upper door panel of the fridge now offers a total of 23 color options. Owners of the 4-Door French-Door model can mix and match colors to their personal aesthetic, with more than 190,000 possible color combinations available. 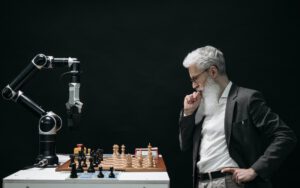 Trending
What Does Chatbot GPT Mean for the Future of Work?

It’s happening. It’s really happening. In the 1950s, people believed we would be zooming around the stratosphere in our personal flying vehicles by at least the year 2000. We may have let those mid-century dreamers down by 20 years or so, but it looks like flying cars are FINALLY becoming a reality.

The first fully-functional prototype of the ASKA A5 electric drive and fly Vertical Takeoff and Landing (eVTOL) vehicle made its debut at CES 2023. The size of an SUV, the ASKA A5 is the world’s first four-seater electric vehicle that can travel by road, and up to 250 miles by air on a single charge. The company is also announcing the ASKA On-Demand ride service (expected to launch in 2026) that will feature a fleet of ASKA vehicles, operating on-demand in major cities and their surroundings.

If we’ve cracked the code for flying cars, electric boats are a breeze to figure out, right? I must admit, though, I’m still impressed.

Compared to other electric speedboats, the C-8 is many times more efficient, thanks to its pair of computer-controlled hydrofoils that help it fly above the water with the hull completely airborne.

While flying on its hydrofoils, it uses around 80% less energy than a traditional boat, which is what allows it to achieve its impressive range figures of over 50 nautical miles. A single charge of its Polestar battery is sufficient for a trip from Miami to Key Biscayne, Florida, and back.

And did I mention, it’s automonous? The C-8 can stick to a course indefinitely, giving it the deserved nickname of the “Tesla of the sea.”

Do you realize how much valuable health data you are flushing down the toilet every time you pee? Neither did we until Withings premiered its first-of-its-kind “urinalysis” device.

One of the company’s most technologically advanced devices to date, U-Scan is a miniaturized health lab that hygienically sits within any toilet bowl to unlock the wealth of health information in daily urine. U-Scan has already been recognized by the Consumer Technology Association as a CES 2023 Innovation Award honoree in three categories: Smart Home, Fitness & Sports, and Digital Health.

In the ongoing quest to make inject more “reality: into virtual reality, Aromajoin created AromaPlayer, which lets creators customize their videos by adding their own scents to them. After picking up a video from your own library or by using a YouTube link, you can add scents on the timeline to set up the perfect smell, timing, and duration for a scent to go with your video.

The scented video platform is powered by its proprietary Aroma Shooter technology, which can switch between various scents without any delay. AromaPlayer is a web application that can be easily access from a Google Chrome browser. There are a few hundred kinds of scents available, from coffee to orange.

Fruit flies found to move their retinas, instead of moving their eyes

Stereotype Threat: Why people perform worse at some tasks based on their identity

Why Integrate ERP Into Your Digital Infrastructure?